Using Student Test Scores to Fire Teachers Is No More Reliable Than a Coin Toss!

Public school teachers and principals deserve fair treatment on important decisions about who should be retained and who should be fired. They should not be fired based on student test scores because the variation in student test scores is random. It is no more reliable than a coin toss. How wise would it be to fire doctors or lawyers based on a coin toss? Heads they stay. Tails they go. Imagine what this would do the morale of staff who had also most no control over whether they stayed or were fired. In this report, we will look at the scientific research (or lack of it) on using student test scores to evaluate teachers.

There are numerous flaws with the using VAM to fire teachers.

First, VAM scores are unfair to teachers working with students from lower income families. Students from higher income homes gain the most on high stakes tests because they did not have to deal with outside problems like living in a homeless shelter. So VAM results in firing teachers in high poverty schools.

Third, VAM scores are not an accurate measure of student learning. High stakes multiple choice tests only measure very low levels of knowledge – like rote memorization of useless facts – rather than a true ability to solve problems.

Fourth, VAM scores vary dramatically depending on the test given to the students. Value added modeling assumes that the students were given a fair test that gave them a fair chance of passing the test. As we have shown in previous articles, Common Core tests are not fair in that they were deliberately designed to fail two thirds of American students even though American students, when adjusted for poverty, do better than any other students in the world.

Fifth, more than 80 research studies have concluded that using VAM to fire teachers is unfair and unreliable.

To better understand the ridiculousness of Value Added Modeling, we will take a closer look at all five of these problems.

#1...VAM scores are unfair to teachers working with students from lower income families

Students from higher income homes gain the most on high stakes tests because they did not have to deal with outside problems like living in a homeless shelter. So the VAM model results in firing teachers who work in high poverty schools. 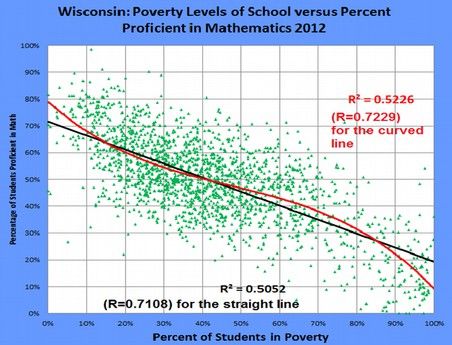 Student test scores are also strongly influenced by school attendance, student health, family mobility, and the influence of neighborhood peers and classmates who may be relatively more or less advantaged. None of these factors are in the control of the teacher.

Here is a quote from one teacher in Houston Texas about their experience with three years of VAM evaluations: “I do what I do every year. I teach the way I teach every year. My first year got me pats on the back; my second year got me kicked in the backside. And for year three, my scores were off the charts. I got a huge bonus, and now I am in the top quartile of all the English teachers. What did I do differently? I have no clue.” (Amrein- Beardsley & Collins, 2012, p. 15)

McCaffrey (2009) did a study of several schools in Florida dividing teachers into five equal groups based on their VAM scores. He found that teachers with the Lowest VAM Scores One Year were likely to have much higher VAM scores the next year. Source: McCaffrey, D. F., Sass, T. R., Lockwood, J. R., & Mihaly, K. (2009). The intertemporal variability of teacher effect estimates. Education Finance and Policy, 4(4), 572–606.

Another study found that across five large urban districts, among teachers who were ranked in the top 20 percent of effectiveness in the first year, fewer than a third were in that top group the next year, and another third moved all the way down to the bottom 40 percent.

Sadly, this problem with VAM being grossly unreliable led to the tragic death of a highly respected 39 year old teacher in the Los Angeles School District. A well liked 5th Grade Teacher committed suicide in 2010 after the Los Angeles Times published the VAM scores of all of the teachers in Los Angeles. This teacher taught at an elementary school with a very high percentage of low income children. Over 60% of the children were Spanish speaking English Language learners. VAM does not make any adjustments for the fact that the students cannot speak English and therefore do poorly on tests that are only printed in English. Naturally, only 5 of 35 teachers were rates by VAM as “average.” The teacher, Mr. Ruelas, had won many awards for being able to work in a bilingual manner to coach and help the children in his classes. But the Los Angeles Times failed to do the research needed to understand that VAM is a SCAM. They published the VAM scores as if they really met something. In our opinion, the Los Angeles Times editors should be prosecuted for reckless manslaughter.
https://www.huffingtonpost.com/2010/09/28/rigoberto-ruelas-suicide-_n_742073.html 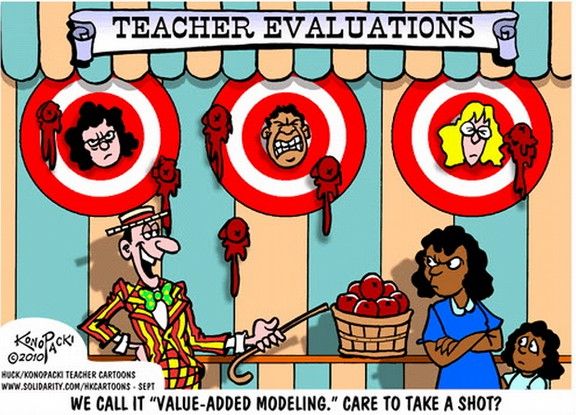 #3... VAM scores are not an accurate measure of student learning
High stakes testing is an inaccurate measure of the knowledge of students because it rates them based on how they did on a single day and on a single test rather than on how they did during a full year of work and on many different kinds of assessment methods. Some students who actually learned more during the year may do poorly on multiple choice tests simply because they are bad at taking high stakes tests (called test anxiety). This is why high stakes tests are an inaccurate way of measuring the knowledge of students or the value of teachers. 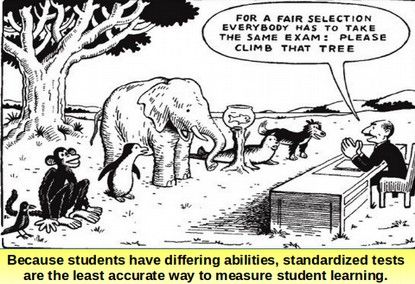 #4... VAM scores vary dramatically depending on the test given to the students and even the day the test is given to students
Value added modeling assumes that the students were given a fair test that gave them a fair chance of passing the test. As we have shown in previous articles, Common Core tests are not fair in that they were deliberately designed to fail two thirds of American students even though American students, when adjusted for poverty, do better than any other students in the world. 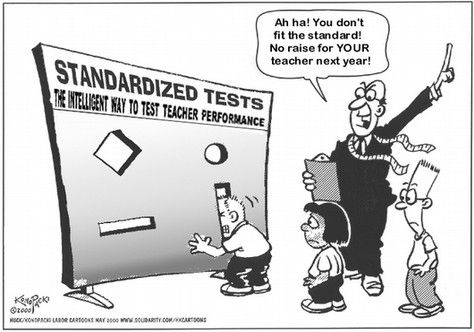 #5... More than 80 research studies have concluded that using VAM to fire teachers is unfair and unreliable
More than 80 studies have been done on using the VAM method to evaluate teachers. They all found that VAM is not a consistent or reliable way to measure teacher performance. Here is a link to a list of these studies. https://vamboozled.com/recommended-reading/value-added-models/

In 2013, Edward Haertel, a Stanford University researcher, published a detailed report on the lack of reliability of using student test scores to evaluate teachers. He concluded that VAM scores were worse than bad. Here is a quote from page 23 of his study: “Teacher VAM scores should emphatically not be included as a substantial factor with a fixed weight in consequential teacher personnel decisions. The information they provide is simply not good enough to use in that way. It is not just that the information is noisy. Much more serious is the fact that the scores may be systematically biased for some teachers and against others...High-stakes uses of teacher VAM scores could easily have additional negative consequences for children’s education.”
https://www.ets.org/Media/Research/pdf/PICANG14.pdf

The Board on Testing and Assessment of the National Research Council of the National Academy of Sciences has stated: “VAM estimates of teacher effectiveness should not be used to make operational decisions because such estimates are far too unstable to be considered fair or reliable.”

If student test scores are Unreliable, how can we fairly evaluate teachers?
There are other more reliable ways to measure classroom performance. One of the most reliable ways is an actual classroom observation performed by trained administrators. Nearly all teachers are subject to this kind of annual evaluation which is used to identify teachers in the greatest need of improvement. 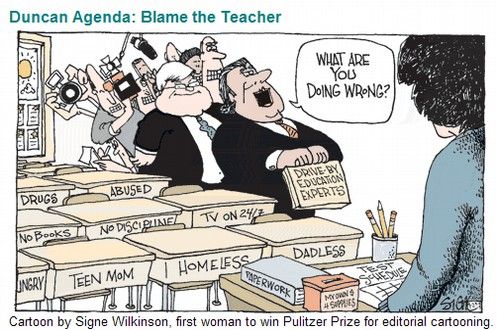 Teachers and Principals Deserve Fairness
Every classroom should have a well-educated, professional teacher, and every public school district should recruit, prepare and retain teachers who are qualified to do the job. The problem comes in unfairly evaluating and firing teachers rather than helping teachers. Our students and teachers deserve an evaluation system that is fair and accurate. Diane Ravitch is one of our nation's leading educational researchers. Here is what she has to say about using high stakes testing to fire teachers: “No other nation in the world has inflicted so many changes or imposed so many mandates on its teachers and public schools as we have in the past dozen years. No other nation tests every student every year as we do. Our students are the most over-tested in the world. No other nation—at least no high-performing nation—judges the quality of teachers by the test scores of their students. Most researchers agree that this methodology is fundamentally flawed, that it is inaccurate, unreliable, and unstable.”
https://www.washingtonpost.com/blogs/answer-sheet/wp/2014/01/18/everything-you-need-to-know-about-common-core-ravitch/

Because VAM would unfairly punish teachers and principals for factors such as student poverty that they have no control over, we urge you to oppose Senate Bill 5748 and House Bill 2019. If you have any questions, feel free to emai us.

Regards,
Elizabeth Hanson M. Ed. And David Spring M. Ed.
Coalition to Protect Our Public Schools (dot) org
This email address is being protected from spambots. You need JavaScript enabled to view it.