Common Core advocates claim we need a single national set of copyrighted standards, a single national curriculum and a national set of high stakes tests to make all students “career and college ready.” There are numerous reasons this expensive and time consuming experiment is doomed to fail. Here we will review just two of the problems with putting the American education system in the Common Core straightjacket.

Problem #1: “One Size Fits All” Standards do not meet the diverse needs of American Students
The hallmark of the American economic system and the American education system has always been an emphasis on creativity, innovation and diversity. We have always opposed “one-size-fits-all” rules for our schools and jobs. A single set of learning standards and a single national curriculum would be as harmful to our education system as permitting only a single political party would be to our political system. Imagine a school system in which only one set of views was allowed. That is the essence of Common Core – a single set of copyrighted standards written by Wall Street consultants and opposed by most child development specialists as being developmentally inappropriate and ignoring one hundred years of research on child development. 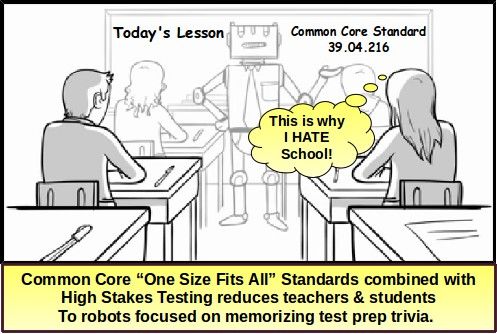 Most of the jobs in 2020 projected by the BLS to employ the largest numbers of people do not even require a four-year college degree. So why are we forcing future plumbers, auto mechanics, pastry chefs and home health aides to memorize the same one-size-fits-all curriculum? Instead, we should allow students and teachers the freedom to develop and learn from authentic, interesting activities, based on current real world problems of interest to individual students and based on their goals and ambitions rather than the dictates of some Wall Street consultants.

Problem #2: High Stakes Tests do not help students become Career and College Ready... But focusing on getting good grades in high school courses do help students become Career and College ready!
There have been numerous studies that have confirmed that high stakes tests are not an accurate predictor of career and college readiness. For many years, large scale scientific studies have shown that the most valid and reliable predictor of career and college readiness is a student's high school Grade Point Average (GPA)– or the average of the combined grades from the 20 to 24 teachers who worked with the student during their four years of high school. Here are links to and descriptions of four of these studies.

“Predicting Freshman Grades from High School Test Scores, Daniel Koretz, et al, Harvard Graduate School of Education, August 26 2014.” This study found that while high school grades in the state of New York predicted 50% of the variance in college grades that high stakes tests were only able to predict 33% of the variance.
https://projects.iq.harvard.edu/files/eap/files/cuny_fgpa_prediction_8.26.2014_wp.pdf

“Validity of High School Grades in Predicting Student Success, Geiser and Santelices, University of California, 2007.”
In a study of more than 81,000 students entering the University of California system, Geiser and Santelices (2007) found that high school grade point average is the most reliable predictor of college success. This study found that while high school grades were able to predict 31% of the variance in college freshman grades, high stakes tests (SAT) were not able to predict more than 3% of the variance. https://www.cshe.berkeley.edu/sites/default/files/shared/publications/docs/ROPS.GEISER._SAT_6.13.07.pdf 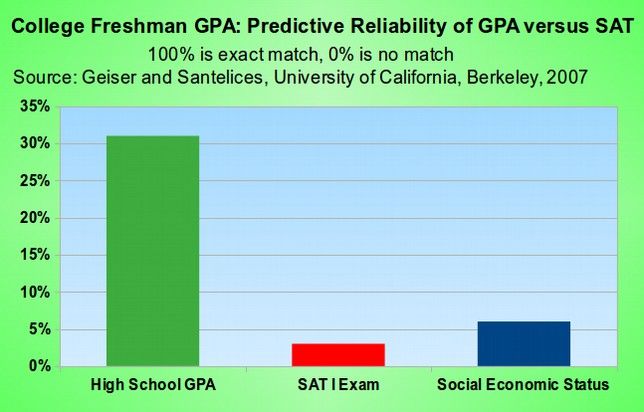 The same study found that high school GPA was also a better predictor of college graduation and college GPA than any other factor. 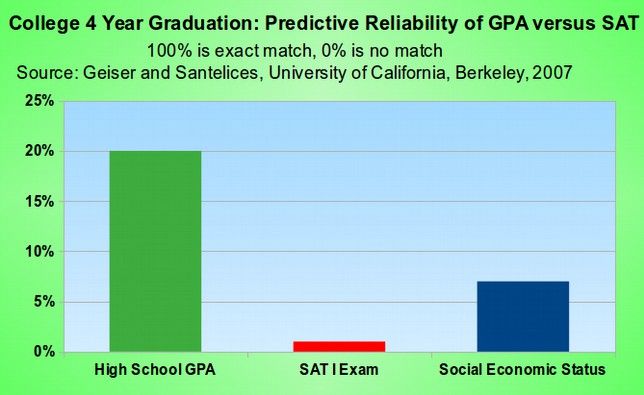 This study of thousands of students in California clearly shows that it is more important for students to do well in all of their four years of high school courses than to do well on a single high stakes test.

A student from a wealthy family who did well on a single high stakes test is not as likely to be career or college ready as a poor student who worked hard in high school and has good study habits.

Why do high school grades accurately predict career and college readiness?
Report cards and grade point average measure years of work on hundreds of assignments from dozens of teachers whereas a high stakes test measures student performance on only a single test during a single day.

These are the teachers and staff of Port Townsend High School in Washington state:

Each of these two dozen teachers spent a full year evaluating each student at Port Townsend high school. Most teachers give their students more than one hundred daily homework assignments and more than 40 weekly quizzes and dozens of other graded projects during the course of a 180-day school year. The collective judgment of these high school teachers is far more predictive of a students career and college readiness than any single one day test.

High Stakes Tests are Related to Family Income Rather than College Readiness
What high stakes tests are more closely related to is the family income of the parents. High school GPA is also fairer to low income students because it is not as closely tied to family income as high stakes single point tests. 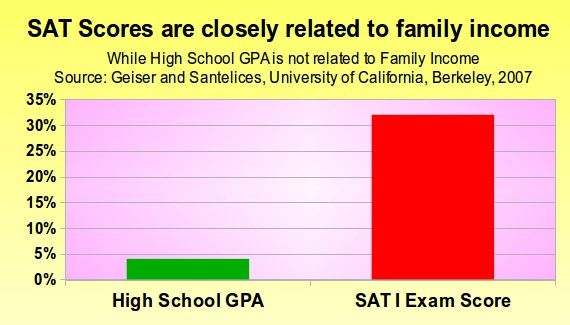 On May 7 2015, Seton Hall educational researcher Chris Tienken released a study in which he was able to accurately predict the scores of thousands students in public schools in several states based solely on knowing their economic status and whether they lived in a one parent household. Here is a quote from his study:

I predicted accurately the percentage of students at the district level who scored proficient or above on the 2011 grade 5 mathematics test in 76% of the 397 school districts and predicted accurately in 80% of the districts for the 2012 language arts tests. The percentage of families in poverty and lone parent households in a community were the two strongest predictors in the six models I created. Colleagues and I predicted the percentages of students scoring proficient or above for grades 6,7,8 during the 2009-2012 school years as well. For example, we predicted accurately for approximately 70% of the districts on the 2009 NJ mathematics and language arts tests. Recently, another colleague and I predicted the grade 8 NJ mathematics and language percentages proficient or above for over 85% of the almost 400 districts in our 2012 sample. The results from Connecticut and Iowa are similar, with accurate predictions in Connecticut on all tests grades 3-8 ranging from approximately 70% to over 80%. The Iowa predictions were accurate in approximately 70% of the districts.
https://christienken.com/2015/05/07/predictable-results/

What message do we send students when we require meaningless, unfair, expensive and time consuming high stakes tests to graduate from high school?
We tell them it is more important to focus on test prep trivia rather than completing their homework assignments, building good daily study habits and getting good grades in schools. Instead of making students more career and college ready, the current emphasis on Common Core high stakes testing makes our students LESS career and college ready.

Have high stakes tests focused on standards based education ever help any students?
Washington state was one of the first states in the nation to experiment with standards based education and high stakes tests. In May 1987, the Washington state legislature passed SSB 5479 establishing “Schools for the 21st Century.” The initial cost of this program was set at $21 million dollars to do a pilot program in several school districts in Washington State to see if “Standards Based Education” reform really worked.

How did the “Schools for the 21st Century” Experiment Turn Out?
A group called Citizens United for a Responsible Education (CURE Washington) wrote a report about how the pilot program turned out. The group said they were exposing “a human experiment, which may have damaged the academic future of 52,000 children who participated in the “Schools for the 21st Century Program.” The 52,000 children whose academic futures were damaged were attending 111 elementary schools in Washington State in 27 school districts. The pilot school districts were allowed to change (required to change) to High Stakes Standards Based Assessments and programs from 1987 through 1994 (when the pilot program money ran out). Most of the pilot programs continued with the experiment when both the pilot program elementary schools and the normal elementary schools took the 4th grade WASL test in 1996. Since the experiment had been going on since 1987, the 4th grade kids subjected to “more rigorous standards” had been forced to endure these standards their entire school career and the teachers using these “raise the bar” standards had been drilling kids with these standards for about 9 years before the WASL test was finally given. Meanwhile, the kids in the normal schools were doing normal stuff like reading stories, drawing in picture books and hanging out with their friends on the monkey bars at recess.

So what were the results? How did the Drill and Kill Ed Reform kids compare to the 4 R kids (Reading, Riting, Rithmetic and Recess). Here is a quote from the study: “The statewide percentiles of students meeting or exceeding the standards were: math, 21%; reading, 47%; writing, 42%. These are the kids who haven’t had ten years of the harder questions. Compare those scores with the “21st Century school” Drill and Kill students who met or exceeded the same standard: math, 15%; reading, 38%; writing, 36%. The (Drill and Kill) students who were trained with harder questions performed 5-to10 percentage points worse on high stakes standardized tests.” https://www.curewashington.org/archives/371

This is important. So here is a graph of the above 1996 WASL data for readers who are more visual learners: 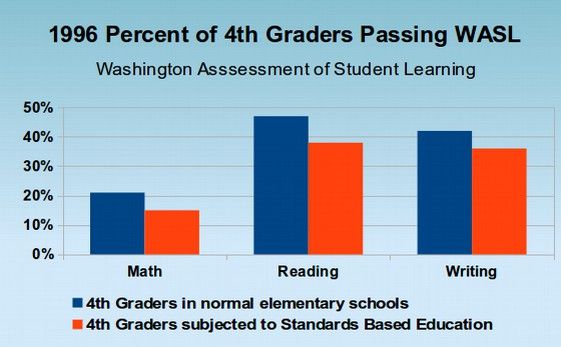 Shocking as it may seem, the project administrators for the 21st Century Schools project lied to the legislature about the progress of kids in the pilot schools. In 1993, they told the legislators that the pilot schools were doing much better than they had done in the past. Again in 1995, the State Board of Education also lied to the legislature and reported to the Washington State legislature that the “Kids in Schools for the 21st Century Project were performing above the academic level of traditional schools.” However, on an independent elementary school test called the Comprehensive Test of Basic Skills (CTBS), the kids in the pilot elementary schools were doing much worse than they had done in the past. In short, after 9 long years of subjecting elementary school children to a much higher bar, the students inflicted with this chronic punishment model of education did significantly worse on the very test intended to measure how much better they would do. Even after years of practice taking high stakes tests, kids exposed to drill and kill education did worse rather than better.

Where did such poorly thought out education policies come from?
This is perhaps the most important question. Why are we spending billions of dollars on meaningless tests and test prep trivia? The answer is that these misguided policies did not come from parents or teachers. They came from billionaires, the federal government and local politicians who make a living by criticizing our public schools. 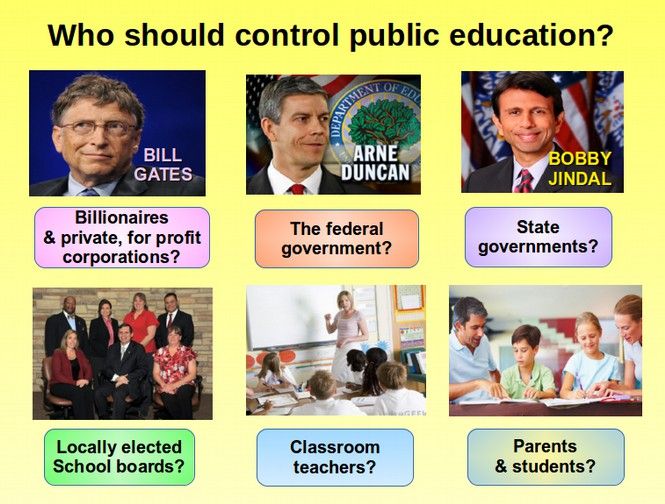 How we can really help students become career and college ready is by going back to the basics and going back to local control over our public schools. We should allow teachers to teach in diverse ways and provide multiple pathways to graduation in order to help each individual student achieve their own personal goals. We should end high stakes testing and help students focus in what really counts – doing their day to day homework and getting good grades in their high school courses. This is why we will be introducing a bill in the Washington state legislature to eliminate high stakes testing as a high school graduation requirement in Washington state. For more information on the drawbacks of Common Core and high stakes testing, visit our website: weaponsofmassdeception.org