There are two Common Core high stakes high failure rate tests, called SBAC and PARCC. Both are paid for with more than one hundred million of dollars in tax payer “development funds” but also cost states hundreds of millions of additional dollars every year to administer. Originally, there were 45 states signed up for these Common Core tests. In the past couple of years, State after State has dropped out of the Common Core test nightmare like rats deserting a sinking ship. In just the past couple of weeks, Maine abandoned the SBAC ship and Ohio abandoned the PARCC ship. Of the original 45 states, 23 have now dropped out leaving only 22 states left – 15 SBAC states and 7 PARCC states.

How the Common Core Test Nightmare Started
In September 2010, Arne Duncan awarded $330 million to PARCC ($170 million) and SBAC ($160 million). According to a USDOE press release, 46 States signed up for either or both of the two Common Core testing scams. But given Minnesota's resistance to the assessments, we will list it as one of the five non-adopter States:

2010 BOTH PARCC and SBAC (observers only) – 12 States: Alabama, Colorado, Delaware, Georgia, Kentucky, North Dakota, New Hampshire, New Jersey, Ohio, Oklahoma, Pennsylvania, and South Carolina. This meant that PARCC originally had a total of 26 States and SBAC had a total of 31 States.

Here is a map of the various States Common Core Tests in 2010. 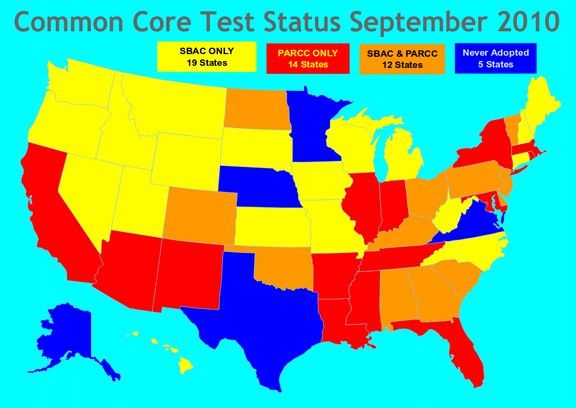 Both Common Core Testing Scams Have Fallen Apart
The biggest loser has been PARCC – which is a test made by a terrible corporation called Pearson. As of January 2015, of the original 25 States in the PARCC camp, with 31 million students, there are only 10 States that have not yet abandoned the PARCC ship. These remaining states have only 5 million students. So PARCC total test takers have fallen by more than 80%:

PARCC Test down from 26 States to just 7 States
A minimum of 15 States is required to get $186 million in federal funding. However, PARCC is now now down to 7 States. In December 2014, Congress killed the remaining Race to the Top funding – which was funding both the PARCC and SBAC Common Core tests. It is therefore uncertain what Arne Duncan will do or how PARCC will be funded in the future. The first to leave PARCC was California which switched to SBAC on June 9 2011. This was followed by South Carolina in August 2012. In 2013, Alabama left in February, Pennsylvania left in June, Indiana left in July, Georgia and North Dakota left in August and Florida left in September. In Florida in 2013, a furor erupted when only 27 percent of fourth-graders passed the PARCC writing test. The state Board of Education promptly, and retroactively, lowered the score required to pass the test - and in a flash, the pass rate jumped to 81 percent. So much for the magic of high stakes tests!

In 2014, Oklahoma left in January, Kentucky left in March, Florida left in May, Arizona, Louisiana and Tennessee left in June, New York made “special arrangements” in July. In New York, after two years of public outrage over the PARCC test (that only had about a 33% pass rate), the State legislature voted to delay the consequences of the Common Core test and to set up a different State controlled test.

All of the above revolts meant that by the August 2014 deadline to pay Pearson for the 2015 PARCC test, only 10 States were left: AR, CO, IL, MD, MA, NJ, NM, OH, and RI. Mississippi withdrew from PARCC in January 2015 and will soon be out of Common Core. Delaware and New Hampshire are now both SBAC States. Indiana, Oklahoma Louisiana and South Carolina have repealed the Common Core standards altogether. In New Jersey, a bill that would slow down the introduction of the Common Core education standards and the use of test scores in teacher evaluations passed the Assembly Education Committee with unanimous support. So it is likely New Jersey will shortly be out of PARCC. This would drop the number of PARCC States down to 8. The PARCC contract in New Mexico is also in dispute after a Pearson connected “bidding scandal.” If this lawsuit succeeds, PARCC/Pearson would be down to 7 States. Massachusetts has put PARCC on hold with a 2 year phase in. This would drop PARCC to only 6 States. In July 2015, Ohio pulled out of PARCC meaning PARCC may soon be down to only 5 states.

SBAC Test also losing States like Rats leaving a Sinking Ship
In 2010, SBAC started with 31 states, 17 of which were designated as governing states. As of July 21, 2014, SBAC still lists 22 states on its website. Unlike PARCC, SBAC appears to still be above the 15-state mark for federal funding. However, if it loses one or two more states in will fall below this crucial mark. According to the SBAC website, the 17 governing States are: CA, CT, DE, HI, ID, ME, MI, MT, NV, NH, ND, OR, SD, VT, WA, WV, and WI. The 3 remaining affiliated Members are IA, NC and WY. This would indicate that SBAC still has 20 States. The map incorrectly shows Missouri. But they are developing their own test for 2016.

In 2012, Utah withdrew from SBAC. In 2013, Pennsylvania opted out in favor of its own test. In December 2013, Kansas jumped ship. Missouri defunded Common Core testing in favor of their own State test. Wyoming joined SBAC in late 2010. However, it has decided to not sign the SBAC agreement and will not administer the SBAC test in 2015. So they are effectively opting out. In August 2014, Iowa also withdrew from SBAC. This brings SBAC down to the following 18 States: CA, CT, DE, HI, ID, ME, MI, MT, NV, NC, NH, ND, OR, SD, VT, WA, WV, and WI. Since then, North Carolina and Michigan pulled out of SBAC and moved to their own STATE tests dropping the SBAC total to 16 states. Then in June 2015, Maine pulled out of SBAC dropping the total SBAC states to 15.

Combined with the 7 States still actively in PARCC, there will be about 22 States giving the SBAC and PARCC tests in 2016.

Here are a couple of websites trying to keep track of all of these changes:
https://www.realcleareducation.com/articles/2014/12/09/common_core_future_elections_heat_map_1140.html#map

After all of these changes, here is a map of where things likely stand as of July 2015: 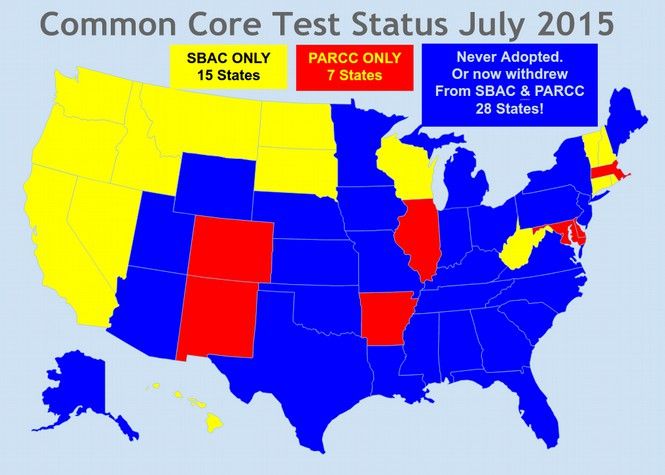 Below is a table summarizing all of these changes for States A through M. 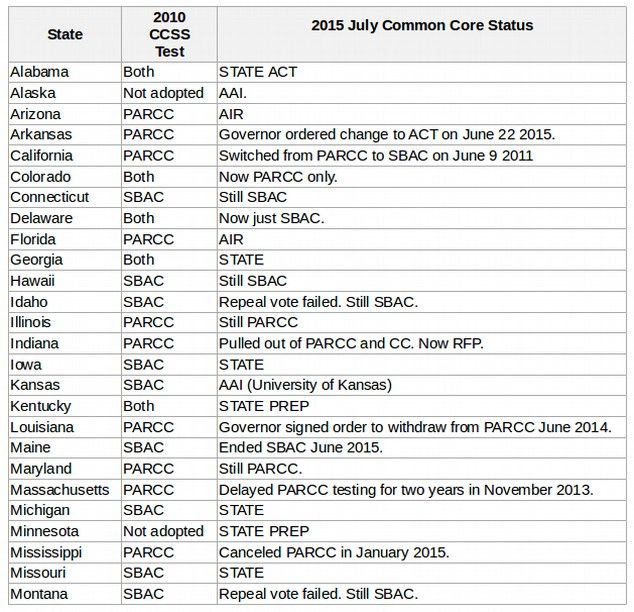 Below is a table summarizing all of these changes for States N through Z. 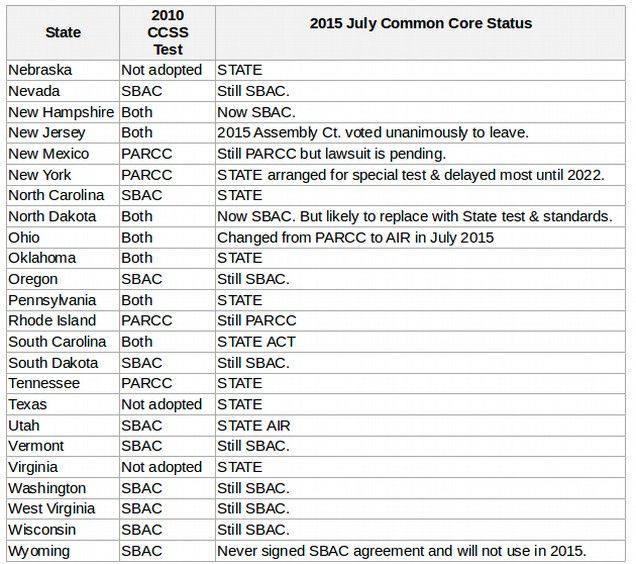 Teachers: Do you think the time that was required to administer the new PARCC assessments (ELA and math) was appropriate? 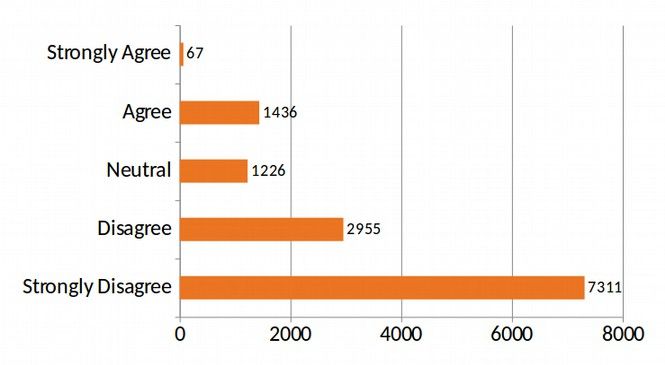 Parents: Do you think the time that was required to administer the new PARCC assessments (ELA and math) was appropriate? 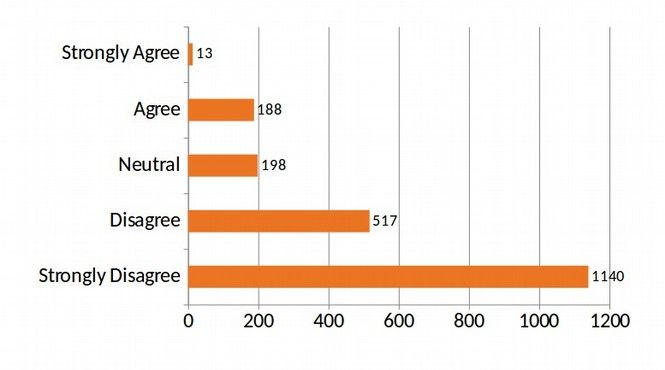 On July 1, 2015, the Washington State Superintendent of Public Instruction announced that more than 50,000 Juniors had failed the SBAC math test – despite the fact that Washington students are among the highest achieving students in the world on both national and international math tests!

The Central Committees of both the Washington State Republican and Democratic Party have already passed resolutions by overwhelming margins opposing Common Core and the SBAC test. The only question left is if the Washington state legislature will wake up and jump ship before the SBAC test boat sinks completely.