I am currently working on a report on the (lack of) reliability and validity of the SBAC Common Core test. To make a long story short, there is no evidence that the SBAC test is either reliable or valid. In fact, there is a mountain of evidence that the SBAC test is not reliable or valid or fair or accurate. But we will get to that in a future report. For now, we need to cover how to tell real science from the junk science being pumped out by the Gates Foundation. Because to my shock and amazement, there have recently been at least a dozen reports published claiming that SBAC is reliable and valid! Of course, all of these fake reports were paid for either directly or indirectly with more than $105 million in grants from the Gates Foundation. 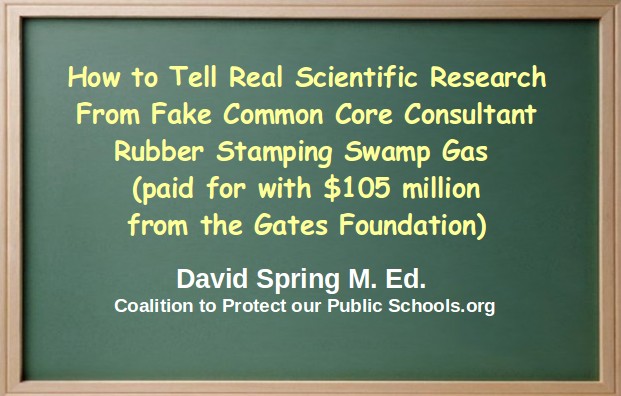 Now, I could have called this article "Follow the Money." But I have already used that title on many other past reports about Common Core and the SBAC test - so I am using a different title this time to change things up a bit. . But this report is about learning how to follow the money.

So let's get right to it. With real scientific educational research, a group of independent researchers, not bought off by any billionaire, would select a large group of representative students, such one thousand 8th graders randomly chosen from an urban school district. These students would be randomly assigned to an experimental group and a control group. A survey would be given to each group to make sure that the groups were matched on important characteristics such as free and reduced lunch status and ELL status. Each group would be given a series of tasks such as completing the 8th grade NAEP Math test, the 8th grade SBAC Math test, the 8th Grade MAP test, the 8th Grade MSP test and/or the 8th Grade Iowa Test of Basic Skills. These would then be compared against comparison measures such as teacher grades in their previous and current year math courses. The actual test questions of every test would be published along with student scores for each test question on each test. Objective analysis and conclusions could then be made about the reliability and validity of various measures using these carefully constructed norming studies. This results and conclusions would be peer reviewed and quite often the entire study could and would be replicated by other independent researchers at other major Universities.

By sharp contrast, fake Common Core reports are conducted by a private for profit consulting firm that receives funding either directly or indirectly from the Gates Foundation, the originator and promoter of Common Core and Common Core tests.

A typical example of a fake research group is HumRRO which recently produced a report supposedly confirming the reliability and validity of the SBAC test. Here is a link to their report. https://www.humrro.org/corpsite/sites/default/files/HQAP_HumRRO_High_School_Study_Final%20Report.pdf

Here is the first page of the report in which they let the reader know that the report was paid for by the Gates Foundation.

Sadly, if you go to the Gates Foundation website and enter the term High Quality Assessment Project, the database does not indicate a single grant.

This is not surprising since the Gates Foundation has at least 100 fake research groups and it often launders money through several groups to hide its influence. It basically pays one foundation which pays a consulting firm which pays another consulting firm to do the actual work - which nearly always concludes that the Gates Foundation project being studied is doing a wonderful job.

In this case, the money was laundered through a group called the Rockefeller Philanthropy Advisors. Gates gave them 12 grants totaling over $30 million to produce this report. Here are just a few of the grants:

College Ready is the Gates category for Common Core tests like the SBAC test:


Here is the first paragraph of the report:

"In the new era created by the federal Every Student Succeeds Act signed into law in December 2015, states have the responsibility to ensure their educational systems produce students who are prepared for the worlds of higher education and work. Student assessments are the primary mechanism for gouging (SIC) the success of state and local educational systems. There are a variety of assessments that can be used... Each of these assessments will have particular strengths and weaknesses... The question then becomes, how can policy-makers obtain clear, thorough, and unbiased characterizations of particular student assessments that reflect the complexities of next generation testing goals, strategies, and formats?"


The report then conveniently explains that there is no longer any need to compare the reliability and/or validity of the assessment system using random assignment of actual school children taking actual tests. Instead, a group called the National Center for the Improvement of Educational Assessment (NCIEA) has come up with a new method to directly compare assessments based on a series of elements made up by the Council of Chief State School Officers (CCSSO).

Never heard of the National Center for the Improvement of Educational Assessment? No problem. They are a private corporation located in New Hampshire that got started with a $700,000 grant from guess who... The Gates Foundation! This was just enough to pay for their website.

Who is on the board of this fake group? Well, the Vice Chair is none other than Lauress Wise, the head researcher for HumRRO. This fake research group has 9 fake research reports all of which promote SBAC and PARCC and none of which involve the actual testing of actual students.

Here is a quote from their latest report:

"How can the quality of assessments of college and career ready standards be evaluated? Based on criteria established by the Council of Chief State School Officers (CCSSO), the National Center for the Improvement of Educational Assessment (Center for Assessment) developed a methodology focused on test content. This document provides a detailed description of the methodology and provides information about the development process."

Sound familiar? As for the Council of Chief State School Officers (CCSSO), the Gates Foundation has given this fake group over $75 million to help produce these garbage reports. 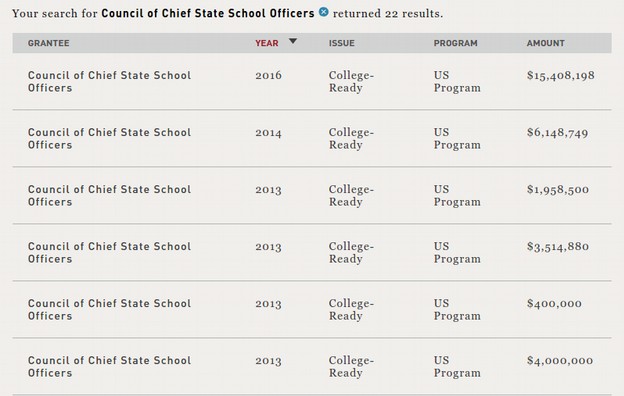 And now for our Oscar winners. For the best performing ELA test, the winners are... PARCC and SBAC: 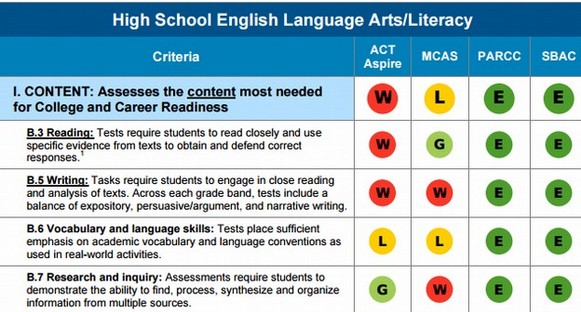 And for the best performing Math test, the winners are... PARCC and SBAC:

Gee. Who could have guessed that PARCC and SBAC would win in a competition set up and paid for by the Gates Foundation!

Note that MCAS is a highly respected Massachusetts State test written by teachers and educational researchers. ACT Aspire is a corporate test that the States of Ohio and Arkansas recently decided to change to after a couple of disastrous years with PARCC. More than 20 states have now dropped SBAC and PARCC in just the past 2 years. Perhaps this is what prompted Bill Gates to spend more than $105 million on a bunch of fake studies.

By the way, it case you are wondering how the authors of the above report managed to compare fixed question tests like MCAS and PARCC to a variable question test like SBAC (which has 40,000 questions that are assigned to students based on their answers to previous questions meaning that there are actually millions of possible SBAC 11th grade math tests), what they did was generate an 11th grade math test at the 40th percentile and another at the 60th percentile. They then used the computer generated questions from these to compare to the MCAS. But the SBAC math test your student will take will have completely different questions.

I will shortly be posting a report on the reliability and validity of alternatives to the SBAC test. In the mean time, my advice to parents is to opt your kids out of the SBAC test. My advice to teachers is to start a protest of this extremely corrupt test and ask other teachers to join you. As always, I look forward to your questions and comments.