In previous articles, we described how school operating funds in Washington state have fallen far below the national average - leading to class sizes in Washington state rising to near the highest in the nation. But school operating funding is not the only thing that has plunged in our State. According to OSPI, State support for school construction funding has also disappeared – falling from 66% of actual cost in 1986 to only 10% of actual cost today. 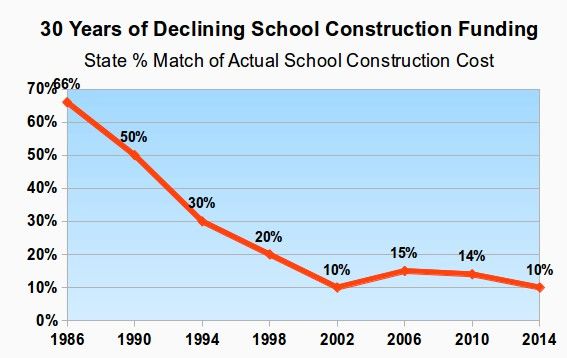 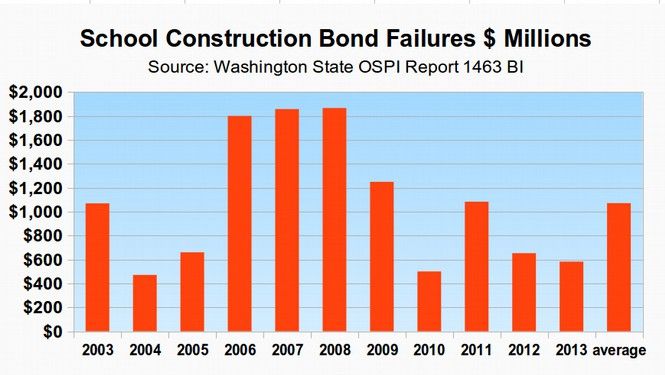 Providing Real Schools for 100,000 Currently Un-housed Students in Washington State would cost $6 Billion Dollars
When billions of dollars in school bonds go down to defeat, school districts are forced to buy temporary portable boxes to use as classrooms. According to a 2008 report by the Washington State Auditor, these portable classrooms cost more than twice as much to heat and maintain as real classrooms. “The most energy-efficient portables cost about 2.5 times as much to heat, cool and light compared to permanent school buildings.”
Performance Audit Report 1000013 Page 21.
https://app.leg.wa.gov/ReportsToTheLegislature/pdf.ashx?f=ar1000013_fcb4d5ab-253a-468d-b748-299d2f896cc4.pdf 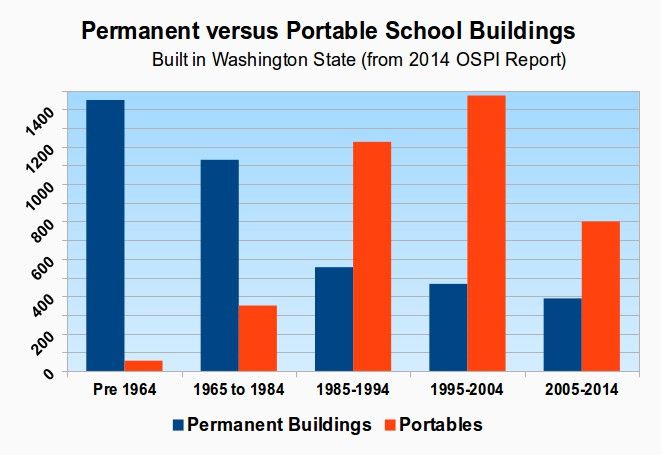 This temporary buildings are not only very expensive in the long run, but they also cause health problems in students and teachers. According to the 2008 Auditor report, one in ten of our children – or more than 100,000 children in our State - are attending school in inefficient and unhealthy particle board boxes. This is double the national average. At 500 students per school, we would need to build 200 more schools just to address the un-housed student problem in Washington state. The actual cost of each school is currently about $20 million for an elementary school, $40 million for a middle school and $80 million for a high school.

The total cost of building 167 additional schools would be about $5.6 billion.

Cost for Full Day Kindergarten Classrooms is $1.6 Billion Dollars
Washington state is moving from half day to full day Kindergarten in the next two years. This is the equivalent of increasing Kindergarten students from 40,000 to 80,000 students. Yet with classrooms already exploding at the seams, there are no classrooms available for these additional 40,000 students. At 500 students per school, it would take building 1600 additional classrooms or 80 additional elementary schools. 80 schools times $20 million per school would require $1.6 billion. True to their pattern of only providing a small fraction of the actual cost, the legislature has proposed providing only $280 million or less than $200,000 per classroom – less than one fifth the actual cost! See 2015 Senate Bill 6080. Even at this meager cost, the legislature still has not passed an actual bill to provide any funding for school construction – despite the fact that it takes a couple of years to build new schools and this change is supposed to go into effect in 2017!

Reducing Class Sizes in Grades K through 3 will cost $4 billion dollars
Another change scheduled for the next three years is reducing class sizes 320,000 students in Grades K through 3 from the current 24 students to 17 students. This will require not only hiring another 5,400 teachers but also building another 5,400 classrooms. At 27 classrooms per new school, this is another 200 elementary schools. Multiple 200 more schools times $20 million per school and the total cost is $4 billion dollars.

Reducing Class Sizes to Support Initiative 1351 will cost $12 Billion Dollars
In previous articles, we have shown that the average class size in Grades 4 through 12 is more than 30 students versus a national average of less than 27 students. Initiative 1351 approved by the voters in 2014 mandates lowering class sizes in Grades 4 through 12 to 25 students. 8 Grades times a grade cohort of 80,000 students is 640,000 students. It would take another 5000 teachers and another 200 schools to lower class sizes down to 25 students for these grades. But middle schools cost $40 million each and high schools cost $80 million each. So we would need $4 billion for 100 middle schools and $8 billion for 100 high schools. The total is $12 billion.

Washington State Public School Building Health: A Hidden Crisis
So far, we have only looked at building new schools. There is also a significant school repair backlog due to decades of neglect by our State legislature. Nearly all buildings are subject to building codes which are regulations intended to insure the safety of occupants. Building codes are revised about every three years. Ironically, the only buildings exempt from these rules are public schools. In order to keep the construction and repair cost of school buildings down, safety codes for public schools have not been revised in nearly 40 years (since 1971). This means that the buildings school children are required to spend their days in are the least safe buildings in our State. Three main areas of concern include: Air quality and ventilation, Water quality, and Protection from pathogens such as mold and mildew. Responding to concerns and complaints from parents and teachers, there have been several attempts to address this problem, both legislatively and from the Washington State Department of Health.

Recognizing the lack of support for improving school building safety in the legislature, proponents have also tried to get these safety issues addressed administratively through the Washington State Board of Health by updating the School environmental health (EH) rule, chapter 246-366 WAC (CR 102). Several hearings on the proposed rule update were held with parents and teachers asking for better air and water quality monitoring while legislators are generally opposed due to concerns about the cost of making schools healthier. These hearings were held by the Board of Health’s Environmental Health (EH) Committee.

During public hearings in 2008, one parent described their child coming home with extreme fatigue, vocabulary loss, headache, bellyaches, and dizziness. Drinking water in her classroom was later found to contain elevated levels of lead. Another parent said her son would complain of terrible stomach pains before dinner every night. She later found out his school had high concentrations of copper in its drinking water. One parent asked: “I know it will cost money to have safe drinking water in our schools. But how much is a child’s life worth?”

Lead exposure in childhood is known to result in reduced brain size, increased aggression, and a greater likelihood of criminality as a teen and adult. The Department of Health estimates that 30% of schools in Washington have drinking water levels that exceed 20 PPBB for lead. It has been estimated that improving indoor air quality would reduce asthma rates by 20% saving our State more than $2 billion a year in health costs as well as greatly improve academic performance. The cost of implementing these safety reforms has been estimated to be about $12 per students or $12 million. In April, 2009, House Bill 2334 was offered by Representatives Dunshee, Williams, Hunt, Ormsby, White, Conway, Hudgins and Chase which would provide $3 billion in school construction and repair bonds. A portion of these funds were intended to cure health problems in our public schools.

Those who voted against House Bill 2334 (in committee) included Representatives Warnick, Pearson, Anderson, Hope, McCune and Smith. The Bill eventually died in the Rules Committee and was never brought up for a full vote in the House of Representatives. It is amazing that anyone could vote against a bill essential for protecting the health and safety of school children.

On June 10, 2009, in their latest summary letter, the Environmental Health Committee stated that despite making numerous compromises to reduce the cost, the 2009 legislature included a clause in the final 2009-11 operating budget, passed April 2009 as ESHB 12444, in Section 222 prohibiting the Department of Health and the State Board of Health from implementing any new or amended school facility rules without approval of the legislature.

Here is the notice posted on the Washington State Board of Health website;
After much testimony from teachers and parents of students, the Board initiated a rule revision in October 2004. The Board adopted the updated rules on August 12, 2009. On December 22, 2009, it filed a rule-making order, WSR 10-01-174, setting an effective date for the new rules of July 1, 2010. However, implementation of the new rules was restricted by the biennial operating budget bill passed during the 2009 legislative session. The Legislature did not find funding during the 2010 or 2011 sessions for implementation of the new rules. Therefore, the Board voted:
March 10, 2010 to delay the effective date of the rules to July 1, 2011

Although the Legislature has not adopted a budget yet for the 2015-2017 biennium, it is expected to have the same concerns about the new school rules as it had when developing past biennial budgets. Therefore, the Board voted on March 11, 2015 to file another rule-making order to delay the effective date of the new rules until July 1, 2017.
https://sboh.wa.gov/OurWork/Rulemaking/SchoolsEnvironmentalHealth

It is known that due to the failure to maintain our public schools, many schools suffer from extreme toxic problems that may cause health problems in sensitive children. Given the rapid rise in asthma, allergies, leukemia, and other severe childhood health concerns, the failure to permit the revision of school health standards, essentially raising them up to the standards already existing for other buildings, is very troubling. Ironically, it would only take a few million dollars to address the health and safety problems in our public schools.

It is hard to escape the conclusion that the State legislature appears to be willing to sacrifice not only the education of our children but the health of our children just to pay for tax breaks for billionaires. In the next article, we will look at building a grassroots campaign to pass Senate Bill 6093 – which would provide more than $4 billion additional dollars per year for building and operating schools simply by repealing a 1997 tax break used by billionaires to avoid paying their fair share of state taxes.