Unfair High Stakes Tests Will Severely Harm More than 180,000 Washington State students in the Next 4 Years

In the past year, both the Washington State Democratic Party and Washington State Republican Party have passed resolutions by overwhelming majorities opposing Common Core and its associatedhigh stakes high failure rate SBAC test. Tens of thousands of teachers have staged walkouts in more than 60 school districts across Washington state to protest these unfair tests. In addition, more than 60,000 parents and their children opted out of the SBAC tests in 2015 – including about 40,000 of our state's 80,000 11th grade students - by far the largest high stakes testing protest ever in the State of Washington. The teachers, parents and students of Washington state have sent a clear message to legislators in Olympia: It is time to end the unfair, invalid and unreliable SBAC test!

Why Are So Many Parents Teachers and Students Opposed to the SBAC Test?
It is important to understand that the entire concept of high stakes testing is based on a very big lie. The very big lie - promoted by corporations that make billions of dollars dumping these tests on our schools - is that the results of a test can predict “career and college readiness.” 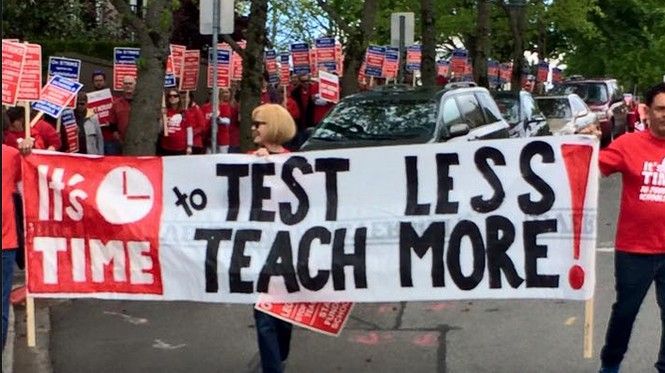 Yet studies done in several states have confirmed that there is no relationship between the scores on high school tests (such as the SAT or any other high stakes test) and college completion. For example, a 2007 study of more than 81,000 high school students in California found no relationship between their scores on the SAT test and completion of college four years later. Many students who did poorly on the high stakes test completed college while many students who did well on the SAT test did not complete college. 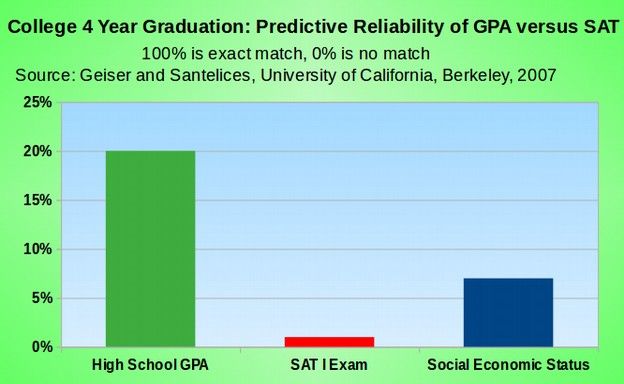 The only factor that predicted college graduation was a student's cumulative high school grade point average (GPA). In other words, how students did in their actual classes matters more than how they scored on a high stakes test.

High Stakes Tests Increase the Drop Out Rate
A 2011 study by the National Research Council found that requiring high stakes tests for graduation does not improve student achievement, but instead greatly increasesthe dropout rate: “The evidence we have reviewed suggests that high school exit exam programs, as currently implemented in the United States, decrease the rate of high school graduation without increasing achievement.” Source: National Research Council. (2011). Incentives and Test-Based Accountability in Education. Committee on Incentives and Test-Based Accountability in Public Education, M. Hout and S.W. Elliott, Editors. Board on Testing and Assessment, Division of Behavioral and Social Sciences and Education. Washington, DC: The National Academies Press. https://standardizedtests.procon.org/sourcefiles/incentives-and-test-based-accountability-in-education.pd

High Stakes Testing increases Prison Populations
Moreover, a study released on July 11, 2013 concluded that students who fail high stakes exams linked to graduation are 12.5% more likely to be incarcerated. In other words, for every one thousand students who fail a high stakes exam, 125 of them will wind up committing a major crime and going to prison – at a huge cost to the tax payers. https://www.takepart.com/article/2013/07/11/high-school-exit-exams-fuel-school-prison-pipeline

Organizing education around high stakes high failure rate tests severely harms the lives of about 10% of our high school students. These students are almost entirely from low income families – end up unable to get a good job or attend a good college due to failure to pass a high stakes test. Since there are about 80,000 students in each grade here in Washington state, ten percent is about 8,000 high school students per year whose lives are harmed by forcing them to take and pass high stakes high failure rate tests in order to graduate from high school. 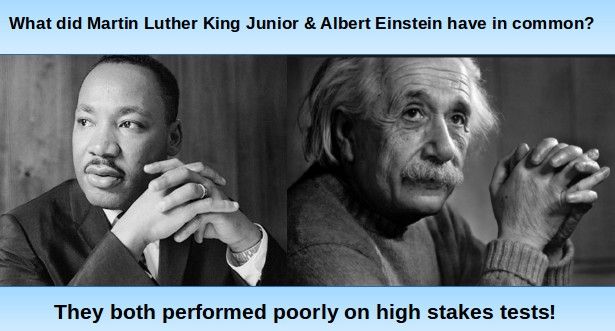 An Emerging Crisis
Despite the massive amount of research confirming that high stakes tests harm rather than help students and are only good for increasing corporate profits, the Washington state legislature in recent years has ignored this research and repeatedly required passing one or more high stakes tests as a graduation requirement – in addition to all of the other graduation requirements imposed on students in our state.

While high stakes math tests have been given to high school students in Washington state since 1999, and have been threatened to become a graduation requirement since 2007, they have only been an actual graduation requirement for the graduating classes of 2013, 2014 and 2015. In December 2006, Governor Gregoire signed an order delaying the math WASL graduation requirement until 2008. Then in 2007, the Washington State legislature passed Senate Bill 6023, sponsored by Senator McAuliffe, delaying the math WASL requirement to 2013. In 2008, the voters got fed up with the awful WASL test and replaced the former pro-WASL Superintendent of Public Instruction, Terry Berguson, with a new Superintendent, Randy Dorn who pledged to eliminate the WASL and replace it with a much shorter, fairer and less expensive test. Unfortunately, instead of a shorter, fairer and less expensive test, Randy Dorn created a longer, more expensive and less fair test called the Common Core SBAC math test. 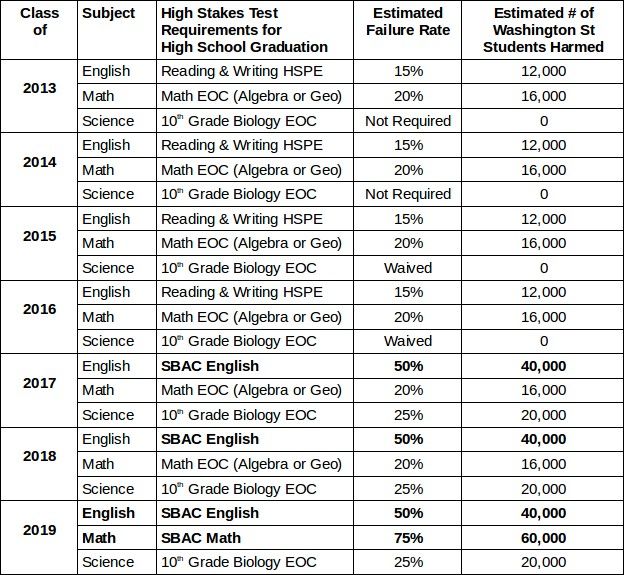 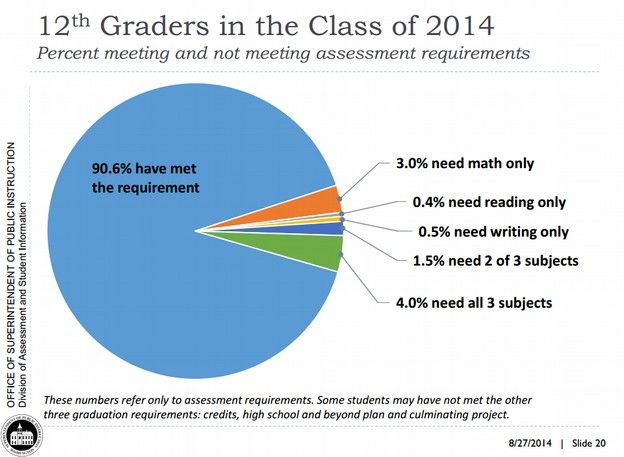 Put in plain English, if the biology assessment placed a roadblock in front of 11,000 students, then the math assessment blocked 10,000 students and the reading and writing exams each blocked 5,000 students. In total, the exam requirement blocked about 15,000 students. Here is what the breakdown was for the graduating class of 2014 (with 2015 and 2016 did not need to pass the Biology End of Course exam).

The above chart shows that about 10% of students in Washington state were not able to graduate in 2014 due to failure to pass a high stakes test and then failure to complete the Collection of Evidence process. This means that in 2014, there were about 8,000 students who did not graduate due to these tests.

Most of these students were blocked by failing two or more tests. Adding the Biology COE/EOC failures to this process will likely lead to this number increasing by the same amount who are blocked on the Math EOC/COE. This will raise the total by about 2,000 to 10,000 students (except that the Biology exam was waived for the Class of 2015 and 2016 in July 2015). 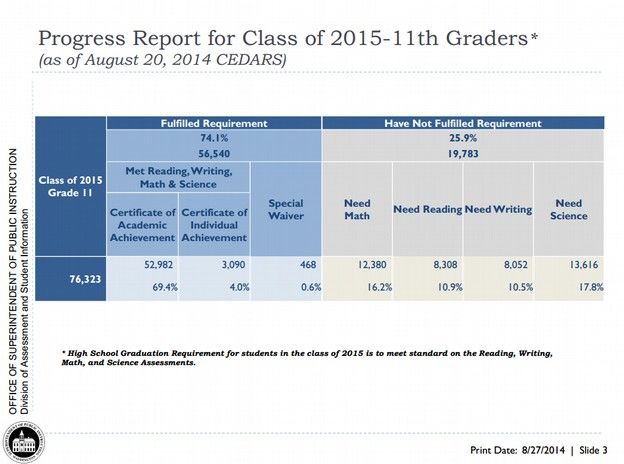 These are all of the students who had failed their State exams and were dumped into the four Collection of Evidence Processes. The above table makes it clear that the problem with math and reading and writing failures for the Class of 2015 is nearly as great as the problem with Biology exam failure. So were is the love for the Math and English failures? Why were all of the speeches in the State legislature focused on the Biology exam problem when the English and Math exam problems were blocking nearly as many students from graduating?

Here is how students from low income families are doing compared to the state average: 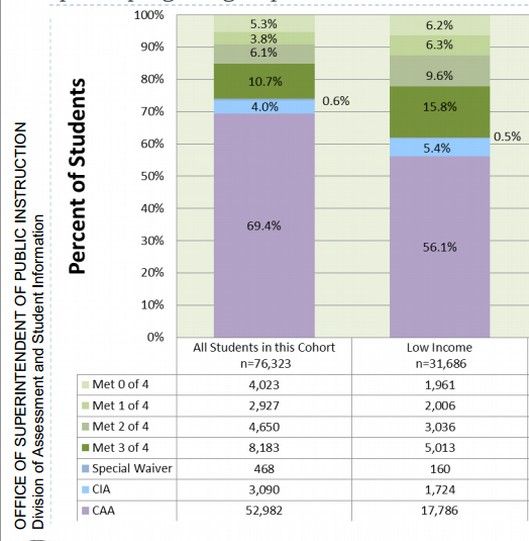 Sadly, the number of students denied a high school diploma will skyrocket in coming years thanks to the switch from the current Washington State End of Course exams to the Common Core SBAC high failure rate exams. On August 17 2015, Washington State Superintendent of Public Instruction Randy Dorn released the results on the 2015 SBAC 11th grade tests: https://www.k12.wa.us/Communications/PressReleases2015/StateTestResults.aspx 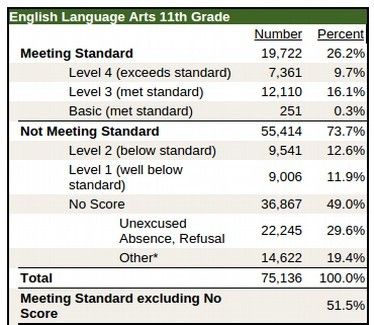 Even worse, the new SBAC 11th grade math test fails about 70% of all students: 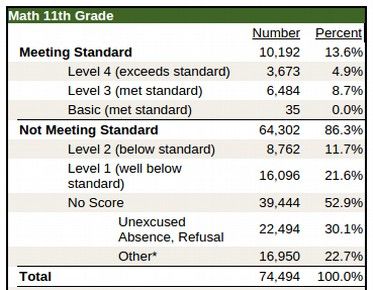 The SBAC Math test is unlike any test that any of us have ever seen. It is so difficult to pass that only 10,000 of our state's 80,000 high school juniors passed it. The SBAC Math test is so difficult, it is unlikely that more than a few members of the state legislature could pass this test. Despite the fact that few students or legislators can pass the SBAC test, during the 2015 legislative session, leaders of the Washington State House of Representatives repeatedly attempted to pass House Bill 2214 – a draconian bill that would have accelerated the adoption of the SBAC Common Core test as a Graduation Requirement from the Class of 2019 to the Class of 2016.

Thanks to a few courageous members of the Washington State Senate, we were able to block House Bill 2214 in 2015. However, it is likely to be back again in the 2016 legislative session. Here is a summary of students harmed by high stakes tests by year: 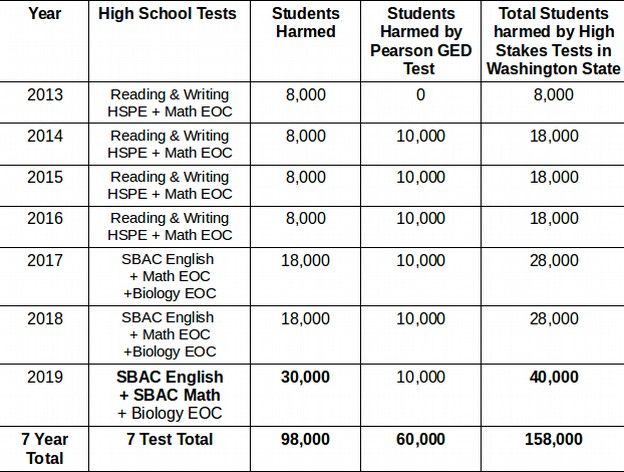 In 2017, the Biology EOC exam will be added back as a graduation requirement. This will increase the number of students harmed by about 2,000. In addition, the SBAC English test fails about twice as many students as the Reading and Writing HSPE test. This will harm another 8,000 students. But the real train wreck will occur with the Class of 2019 when the insane SBAC math test becomes a graduation requirement. This test will fail about 70% of all Juniors – or more than 56,000 students. If House Bill 2214 (or something like it) is adopted, these struggling low income students will be required to take a 4th Year of Advanced Math. Assuming that only half of these students are able to pass their advanced math course, this will increase the number of students harmed just be the math test to 27,000. Add the SBAC English and Science tests and the number harmed will exceed 30,000. 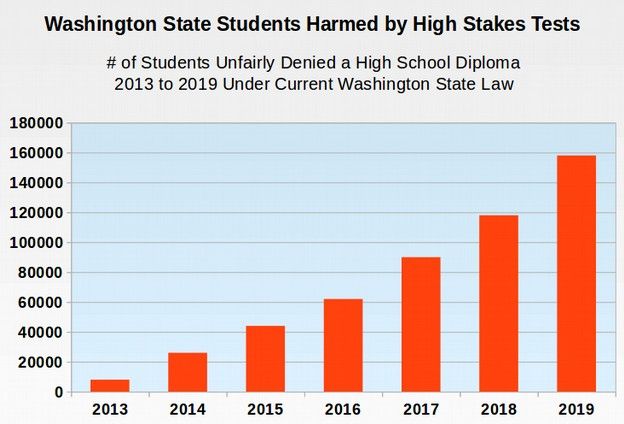 As bad as this harm is under current law, if House Bill 2214 is adopted in the 2016 legislative session and the high failure rate SBAC test becomes a graduation requirement for the Class of 2017 instead of the Class of 2019, the number of students harmed we be even worse: 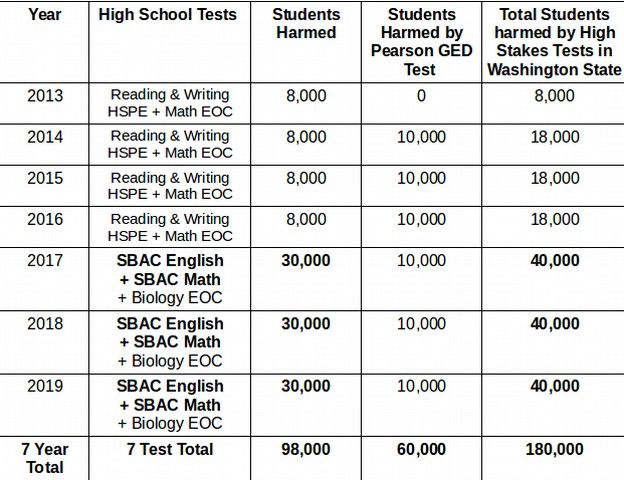 Here is the graph if House Bill 2214 passes in the 2017 legislative session: 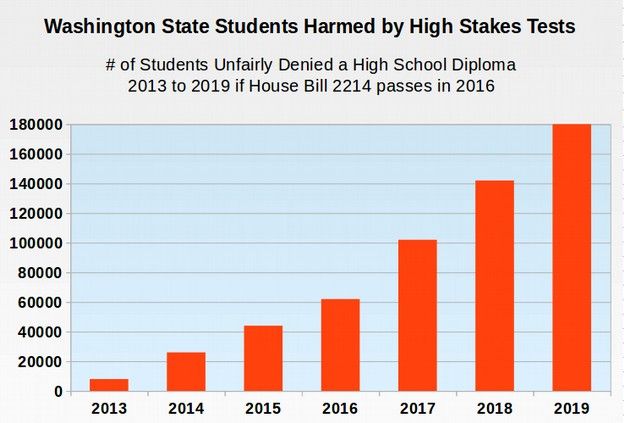 The Solution to this Problem is to Pass Senate Bill 6122
As the above tables indicate, 44,000 students in Washington state have already been harmed from 2013 through 2015 due to the high stakes testing insanity. By the year 2020, this number will skyrocket to 158,000 students harmed by being forced to pass an unfair high failure rate high stakes test just to get a high school diploma. Keep in mind that there is no benefit to any of these tests other that creating billions in corporate profits.

Senate Bill 6122 sponsored by Senator McAuliffe with 10 other senators as cosponsors, return our state to sanity by completely eliminating all high stakes tests as a graduation requirement - meaning that any student who passed all of their required courses would be allowed to graduate. No student would be denied a diploma simply because they were unable to pass an unfair and unreliable test. This also means there would be no penalty for parents and students who opted out of the state exams. If Senate Bill 6122 passed in the 2016 legislative session – and a fair GED test bill also passed, the harm inflicted on our students by unfair high failure rate tests would end. Here is the graph: 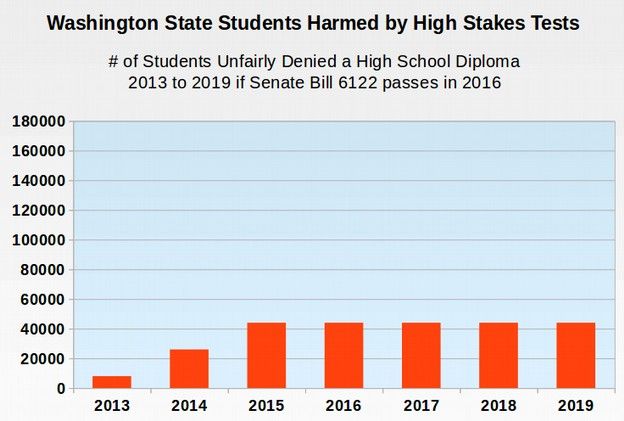 Here is a list of ten advantages of Senate Bill 6122 over House Bill 2214 and/or our current laws: 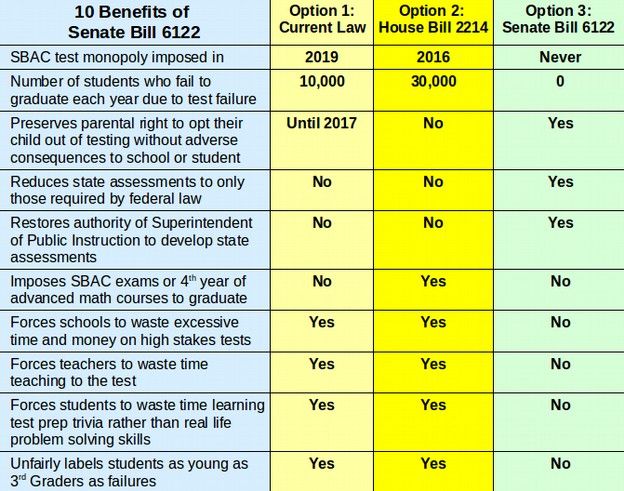 Hopefully members of the House and Senate will finally wake up, realize the extreme harm that high stakes tests unfairly inflict on our students and pass Senate Bill 6122. There is no other solution that really addresses the problems of unfair high stakes high failure rate tests. As always, we welcome your questions and comments.