Today, July 2 2015, Washington State OSPI released the preliminary results of the SBAC tests. With over 90% of the student scores reported, the results are truly shocking. Only 29 percent of Washington High School students passed the SBAC math test. Put another way, more than 50,000 Juniors failed to pass this unreliable and unfair SBAC test. This is important because if House Bill 2214 were to pass the Senate in the coming days, passing this SBAC math test would be required for graduation and over 50,000 students would be at risk of not graduating in June 2016 just due to failure to pass this extremely difficult math test – a test so difficult that almost no one in the State legislature could pass this math test! Here is the graph released by OSPI today. 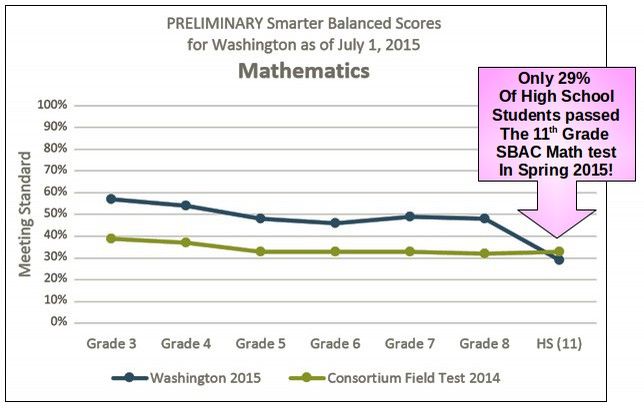 Here is the link to the article on the OSPI website:
https://k12.wa.us/Communications/PressReleases2015/PrelimSmarterBalancedResults.aspx

The grade cohort for the Class of 2016 is about 80,000 students. If all 80,000 Juniors had taken the SBAC math test this spring, only 23,200 would have passed the test. In fact, we estimated based on information from our website Opt Out Washington (dot) org that at least 6,000 high school seniors opted out this test in Washington state in 2015. It is possible that the Opt Out number is much higher. In addition, we estimate that over 4,000 and possibly many more high school Juniors have already dropped out of school before this test was administered. Thus, at most 70,000 high school Juniors took this test and therefore it is likely that only 20,000 high school students have passed the test. This leaves 55,000 to 60,000 students at risk of not graduating next year if House Bill 2214 passes during the Third Special Session. 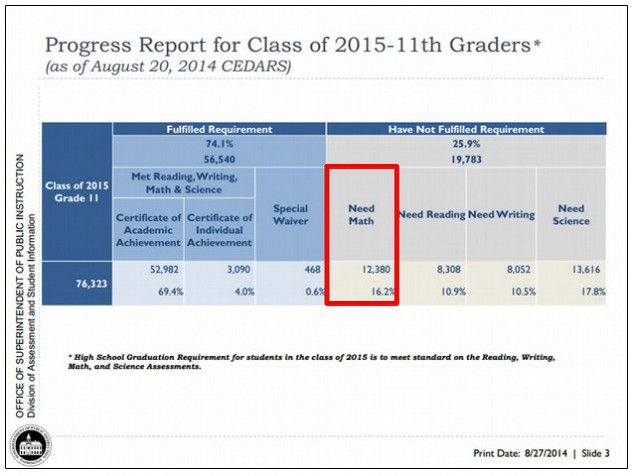 So the number of students who will fail to meet the Math Test standard will skyrocket if House Bill 2214 is passed from 12,380 to over 50,000 students: 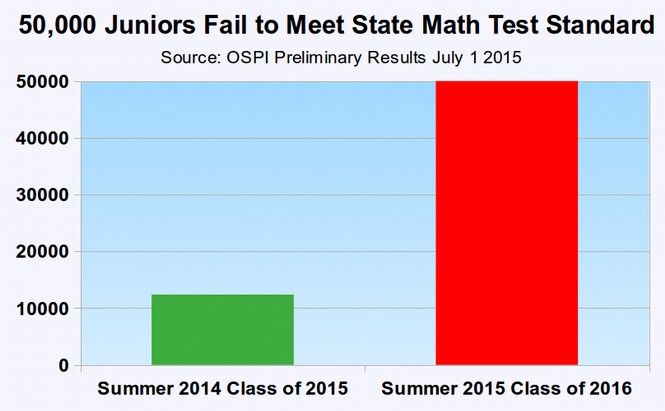 What is most shocking about this result is that these same students who were not able to pass the unfair SBAC Math test were second in the nation on the NAEP (National Assessment of Student Progress) Math Test and among the highest performing math students of any students in the entire world on international math tests! 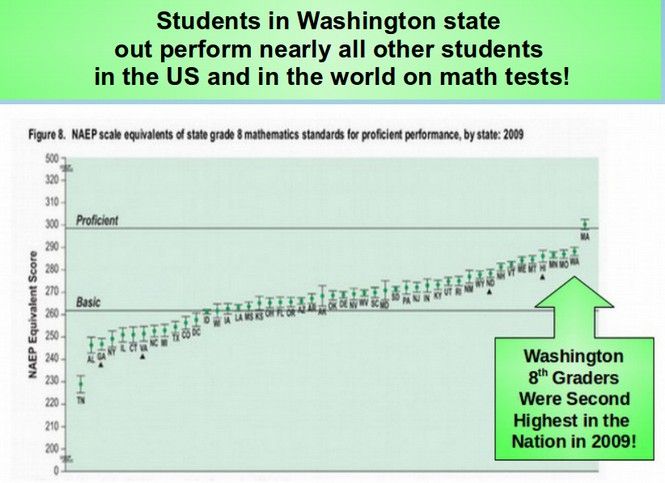 
Is it fair to deny our students a high school diploma because of a single unfair high failure rate test that few adults can pass? These students have worked hard for 12 years passing dozens of courses and completing thousands of assignments. If they have completed all of their required courses they should not be denied a diploma due to an extremely unfair test!

Please contact your State Senator by phone or email today. Urge them to oppose House Bill 2214 should it come up for a vote. If they want to help the 2,000 seniors who are currently being denied a diploma due to failure to pass the Biology End of Course exam, the legislature should pass a simple Biology Test Waiver bill. They should not jeopardize the future of 50,000 high school seniors next year simply to help 2,000 high school seniors this year.