This report is a follow up to an article I published in January 2016 called "End the Struggling Student Shell Game." In that article, I explained how some school districts in Washington state, including the Tacoma and Highline School Districts, werefailing to count hundreds of struggling high school students in order to artificially increase their graduation rates. See the following link to read this report: https://coalitiontoprotectourpublicschools.org/latest-news/end-the-struggling-student-shell-game

Let's say there are 1,000 students in the 9th grade cohort in your school district for each of the past several years. Each year may be slightly different. But the total number has remained about the same for most school districts in Washington state for the past several years. Let's further say that only 600 of these 9th graders graduate four years later. This makes the graduation rate 600 graduates/1000 original 9th graders = 60%.

Where did the 200 struggling students go who are suddenly no longer part of the 9th grade cohort? They went into a place I call the ALE Loophole. ALE stands for Alternative Learning Experience, a corrupt program now made famous as the place where all of the 1000 charter school kids were illegally put by Randy Dorn in December 2015 after the Washington Supreme Court ruled that charter schools were unconstitutional. A common ALE scam is to put the struggling students into an Online program in a different school district. The problem with these Online Programs is that they offer no help to struggling students and have a graduation rate of less than 30%. Even though the struggling students all still live in their home school district, they no longer count as part of their home school district - and they also do not count as part of the cohort of their new school district. They simply become invisible. And sadly, instead of getting the help they need, most of these now invisible students never graduate.

Now that you understand how the struggling student shell game works, let's see how it is used by the Highline School District to artificially inflate their graduation rate.

Here is a link to Dr. Enfield's misleading presentation to the Burien City Council: https://www.burienmedia.org/docs/CityCouncil2016_01_04/Item%207a.pdf

Here is the first slide of this presentation:

Enfield claims that the graduation rate in the Highline School District is now over 70%. 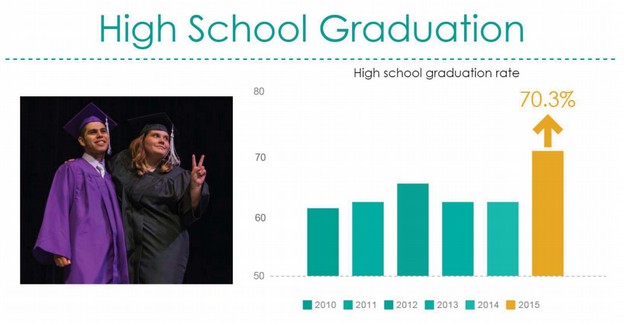 But note that Enfield did not provide either the numerator or denominator for how this 70% was calculated. We are not told how many students graduated or were in the 9th grade cohort. The Highline School District has 20,000 students. More than two thirds of these students, more than 13,000 students come from low income families living near the poverty level. Only one in three 8th graders passed the SBAC math test in 2015. Of 1,164 11th graders, 810 or 70% opted out of the SBAC math test. Of those who took the 11th Grade SBAC math test, only one in three passed.

Enfield credits numerous corporations for helping with this amazing turn around of the Highline School District. 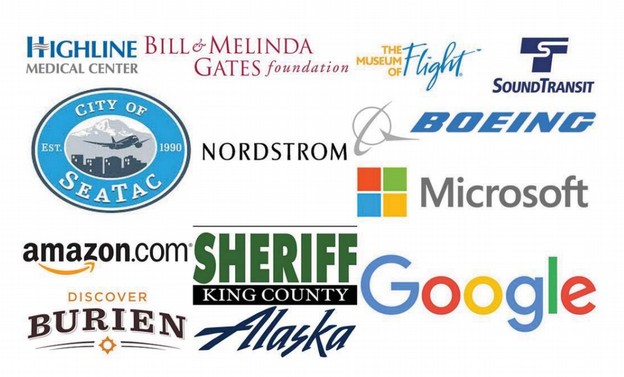 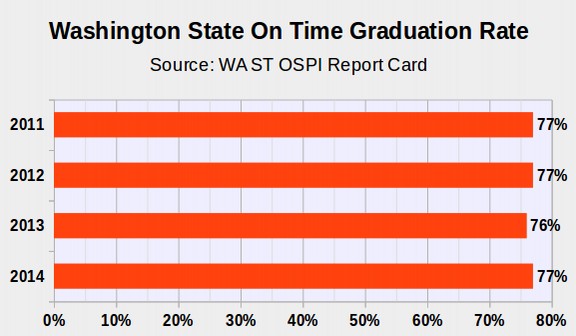 Greatly Under Reporting the Number of 9th Graders
The on time graduation rate should be simple to determine. Just take the number of graduates in any given year and divide it by the number of 9th graders who started high school 4 years earlier. To see the OSPI Graduation reports, go to the OSPI website and click on Research, then Data and Reports, then Dropout and Graduation. Here is the direct link to this OSPI page:
https://k12.wa.us/DataAdmin/default.aspx#dropoutgrad

You will see several confusing reports for each year: 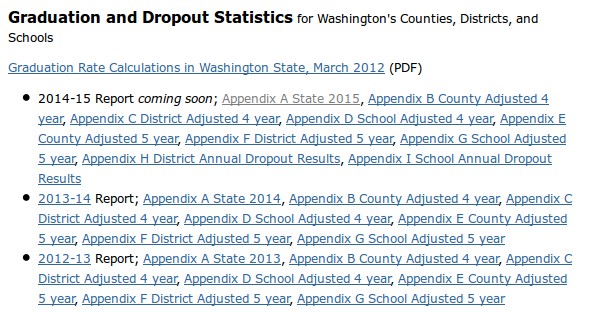 62,598 student graduated 4 years later for a claimed graduation rate of 78% for the Class of 2015. 41,000 of these students were low income meaning that over half of the graduating class of 2015 lived at our near the poverty level.

Then go to the NINTH row and look at October enrollment. It was 83,984 students or about 4000 more students than listed on the state graduation report. Wait- how can this be when Appendix A said that the cohort was only 80,000 students? This is our first clue that about 4,000 students have been hidden!

How OSPI Hides 9th Graders
We noted above that the OSPI Statewide Report Card for the past 4 years shows an on time graduation rate of about 77%. However, these graduation rates were based on an average claimed 9th grade cohort of about 79,000 to 80,000 students. The actual 9th grade cohort averages about 86,000 students meaning that about 4,000 to 7,000 students per year or almost one in ten high school students has somehow been "hidden" and is not being reported!

But the OSPI graduation report shows a much lower number of 9th graders. Go to the OSPI website and click on Research, then Data and Reports, then Dropout and Graduation. You will see several confusing reports for each year. What we want is the most recent school district reports. This is 2014-15 Appendix C District Adjusted 4 year. Click on the link to download the Excel spreadsheet. Then open the spreadsheet and scroll down the page to the Highline School District. Here is what you will see:


Below is a graph of the difference between the reported graduation rate and the actual graduation rate for the four least honest school districts for the Graduating Class of 2014: 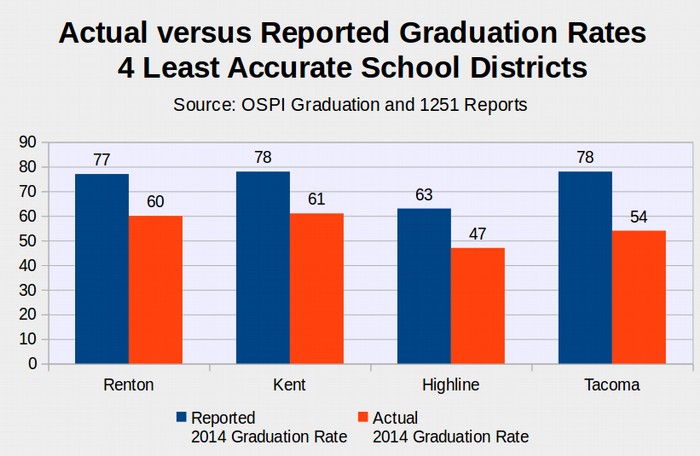 
Where did the 322 missing Highline 9th Graders Go?
There is a loophole in state law that allows a school district to not count any students transferred to an Alternative Learning Experiences program (ALE) that is outside of the school district. The student no longer counts in the grade cohort of their home district or the grade cohort of the district offering the ALE program. Many of these ALE programs are "online programs" that have a very low success rate.


The ALE programs are funded by something called Open Doors (enacted through 2010 House Bill 1418) which is Washington state’s dropout reengagement program. Open Doors allows state Basic Education funds to “follow the student.” However, these non-traditional programs can turn into money laundering operations run to funnel state dollars to private for profit corporations that have little value to students. The Open Doors program was promoted by a group called the National League of Cities Institute. This group was funded with $8 million from the Gates Foundation - which seems to specialize in getting public educational funds transferred to private for profit organizations.

Here is a graphic of some of the ALE programs offered by the Highline School District. 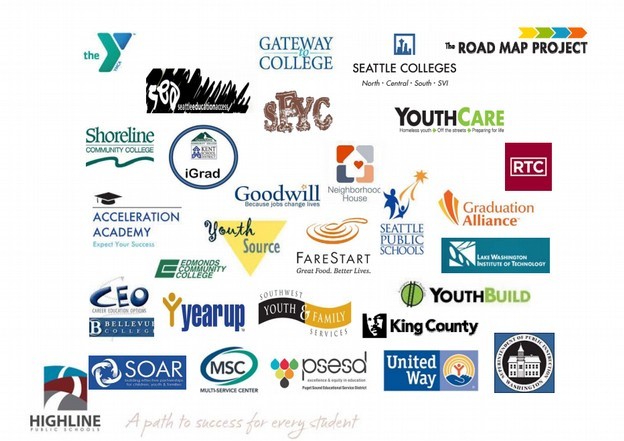 We will use one of these ALE programs as an example of how the Struggling Student Shell Game is used to artificially inflate the graduation rate in the Highline School District. One of the logos above is an ALE program called IGrad. I Grad is an Alternative Learning Experience program operated by the Kent School District where kids sit in front of a computer screen for hour after hour using computer programs to attempt to complete courses they need to graduate. According to the OSPI report card, IGrad has about 500 students in grades 9 through 12. IGrad unfortunately has an on-time graduation rate of less than one percent and an extended graduation rate of less than three percent. Less than 5% of 11th graders enrolled at IGrad were able to pass the SBAC 11th grade math test.

The cost of the IGrad program to tax payers is about $7,000 per pupil in state funding times 500 students or about $3.5 million per year. The total for all ALE programs in Washington state comes to hundreds of millions of dollars each year. This cost would not be that great if the program actually helped students graduate. According to a Columbia University study called "The Economic Value of Opportunity Youth," each dropout costs taxpayer a lifetime burden of more than $250,000 in food stamps, criminal justice, medical and other expenses. Preventing even just 4 dropouts and turning them into high school graduates would save tax payers one million dollars.
https://www.ecsphilly.org/wp-content/uploads/2012/12/Econ_Value_Youth_Jan_11_2012.pdf

Multiply that quarter million dollars per drop out by 20,000 dropouts in Washington state each year and the long term cost of failing to provide struggling students with the help they need is $5 billion per year. So a few hundred million dollars would be a reasonable investment for 20,000 at risk students if the ALE programs actually worked.

The problem is that many of the ALE programs do not actually help students. This is because sitting in front of a computer screen hour after hour is not the best way to help a struggling student learn. Instead, struggling students need real help from real teachers. We need to double school funding so we can cut class sizes in half in all grades so that struggling students can get the help they need to succeed in school and succeed in life. 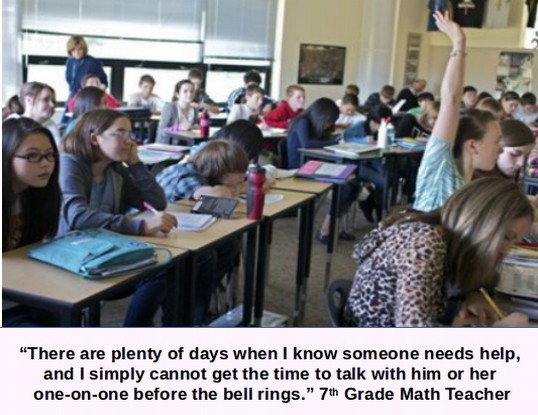 Sadly, despite the fact that many ALE online programs do not work, we are seeing more and more of them because while there may not be much benefit for struggling students, there is a huge benefit for school districts interested in deceiving the voters into thinking that their graduation rates are going up (when they are really not). In the case of the Highline School District, all they need to do is "counsel out" 330 struggling students to IGrad or any of 20 other ALE programs around the state and suddenly their graduation rate skyrockets from 55% to 70%. What does not go up at all is the actual number of high school graduates in the Highline School District.

Would parents encourage their son or daughter to enroll in an online educational program that has only a three percent success rate? Would tax payers want to pay for a program with such a low success rate? Would voters vote to re-elect legislators and school board members pushing such scams?