Senate Bill 6093.. A Simple Solution to the School Funding Crisis in Washington State

It is the Paramount duty of the state to make ample provision for the education of all children residing within its borders…Article 9, Section 1, Washington State Constitution

1997 to 2015 18 Years of Billions in Tax Breaks for the Super Rich
Unfortunately, in the 1900s, the state legislature began passing billions of dollars in tax breaks for wealthy corporations. By 1997, school funding in Washington state fell to 25th in the nation. Then, as we explained in our last article, between 1997 to 2001 school funding in Washington state fell even more – to billions of dollars per year below the national average where it has remained ever since! 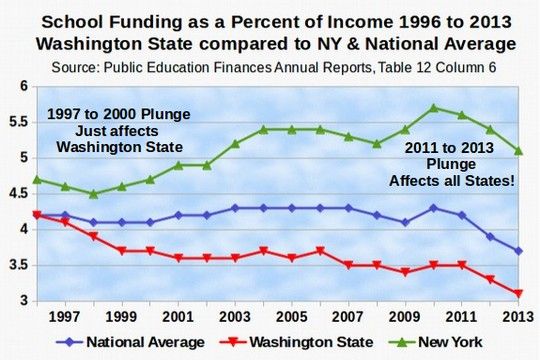 We can see from the above graph that the 1997 to 2001 plunge in school funding was caused by a problem in our state rather than a national problem – as national average school funding actually rose after 1997. But money never disappears. It is simply diverted from one place to another. So where did the billions of dollars that should have been spent on public schools go? 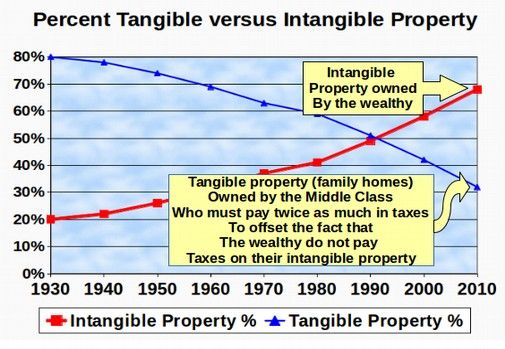 Historically, intangible property accounted for a very small percent of all property. However, with the concentration of wealth in the hands of the richest one percent, intangible property now account for over 70% of all property. Over 90% of intangible wealth is owned by the top one percent of our richest citizens. This massive 1997 tax loop hole has given billions of dollars in tax breaks to our richest citizens every year during the past 18 years by exempting over one trillion dollars of “intangible property” from our State property tax. It is the single largest tax break in the history of our state and bigger than the Billion Dollar Per Year Boeing Tax Break and the Billion Dollar Per Year Microsoft Tax Break combined!

Currently, the Intangible property tax exemption is as much as $8 billion annually. By comparison, funding for our public schools for one million school children is also $8 billion annually. So we spend as much on this single tax break for the rich as we do on educating our state's one million school children. This tax breaks caused state revenue as a percent of income to plunge compared to the national average state income. https://www.taxpolicycenter.org/taxfacts/Content/PDF/dqs_table_77.pdf 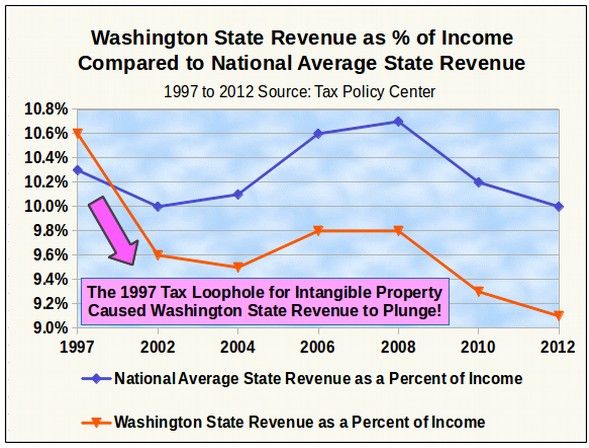 While national average state revenue remained above 10% of income, state revenue in Washington state has fallen to only 9% of income. This does not sound like much of a difference – but it comes to $3 billion in revenue less per year! Source: Washington State Department of Revenue https://dor.wa.gov/docs/reports/2008/Compare06/Table3.pdf 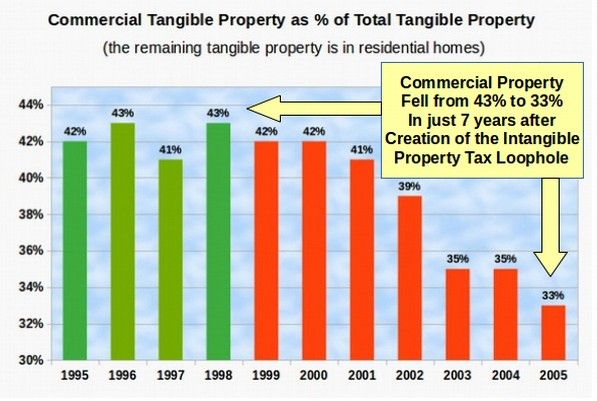 The property tax burden on middle class homeowners has skyrocketed in the past 14 years as the ratio of commercial to residential tangible property has shifted from about 50-50 in 1997 to 66% residential to 33% commercial by 2006. When $100 billion dollars of commercial property is exempted from property taxes, residential property taxes must go up even if State and local spending remains the same.
As a consequence of these tax break for millionaires, and tax shifts to our middle class, our middle class now pay much more than the national average in State taxes while millionaires in our State pay much less than the national average. Working families see their tax bills go through the roof and they naturally assume that State spending is “Out of control.” But what is really out of control is tax breaks for billionaires.

Because of all the tax breaks they get, billionaires now pay less than 3% of their income in State taxes. Meanwhile, our poor and middle class pay State taxes at a rate of 16% or more. We have allowed our State to become a tax haven for billionaires. Those who can afford to pay the most are paying the least. Meanwhile, those who can afford to pay the least pay the most. As a consequence of these tax breaks for billionaires, in just the past 10 years, the richest one percent have gone from owning 20% of our nation’s wealth to owning 40% of our wealth. https://www.itep.org/pdf/whopaysreport.pdf

Many Efforts to Restore School Funding Since the 1997 Plunge Have All Failed
The plunge in school funding since 1997 closely parallels a related plunge in State revenue. The loss of billions in state revenue caused school funding in our state to fall from above the national average to among the lowest in the nation. In response to the rapid decline in school funding in the late 1990's, voters passed Initiatives 728 and 732 trying to restore school funding in 2000. Unfortunately, the State legislature refused to honor these two Initiatives – preferring instead to continue the 1997 tax break for billionaires and grant billions of dollars in additional tax breaks to wealthy multinational corporations like Microsoft and Boeing.

This ongoing transfer of billions of dollars per year away from public schools to the pockets of billionaires led to the NEWS Coalition McCleary Lawsuit which began in 2005. The trial was in 2009. In 2010, the trail court agreed with the NEWS Coalition that the legislature was not complying with Article 9 Sections 1 and 2 of the Washington State Constitution. In 2012, the Washington State Supreme Court agreed with the trial court and ordered the State legislature to comply with our State Constitution and fully fund our public schools. Unfortunately, the State legislature ignored the 2012 order of our Supreme Court and continued with their billions in tax breaks for the wealthy.

On September 11, 2014, the Washington State Supreme Court for the first time in the history of our state found our State legislature in contempt of court for failure to comply with a 2012 Supreme Court order to fully fund our public schools. The Supreme Court gave the legislature a firm deadline until the end of the 2015 legislative session to comply with the court order. In addition, on November 4, 2014, the voters of Washington state passed Initiative 1351, the Class Size Initiative, which required the State legislature to restore school funding and class sizes in our state to at least the national average. Finally, in April and May 2015, teachers across Washington state began a series of rolling walkouts to protest the legislature's lack of funding for public schools

Sadly, instead of passing a bill to fully fund public schools, the 2015 legislature has once again kicked the can down the road by proposing to set up yet another in a long line of Education Funding Committees. This is not likely to satisfy the Supreme Court, the teachers or the voters. It is likely that the Supreme Court will be forced to take additional action in the coming months. It is also possible that teachers may launch a statewide strike in the fall to protest the lack of funding. In short, our state is about to face a Constitutional School Funding Crisis. 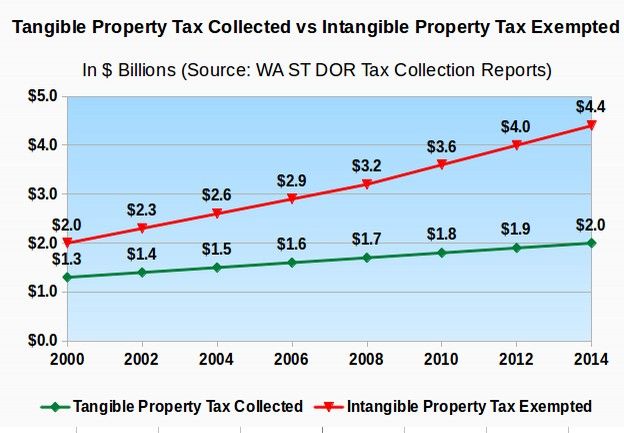 Given that the current legislature continues to ignore the Supreme Court and ignore the will of the voters by continuing to kick the school funding can down the road, now is the time to begin a public discussion over the best way to balance the State budget while still protecting the future of our children and our communities. Funding our public schools should be more important than protecting tax breaks for billionaires. We hope parents and teachers will help us get this bill on the ballot. With the serious nature of our current school funding crisis, it is time to put all options on the table and begin a public discussion over the future of our schools and our State.